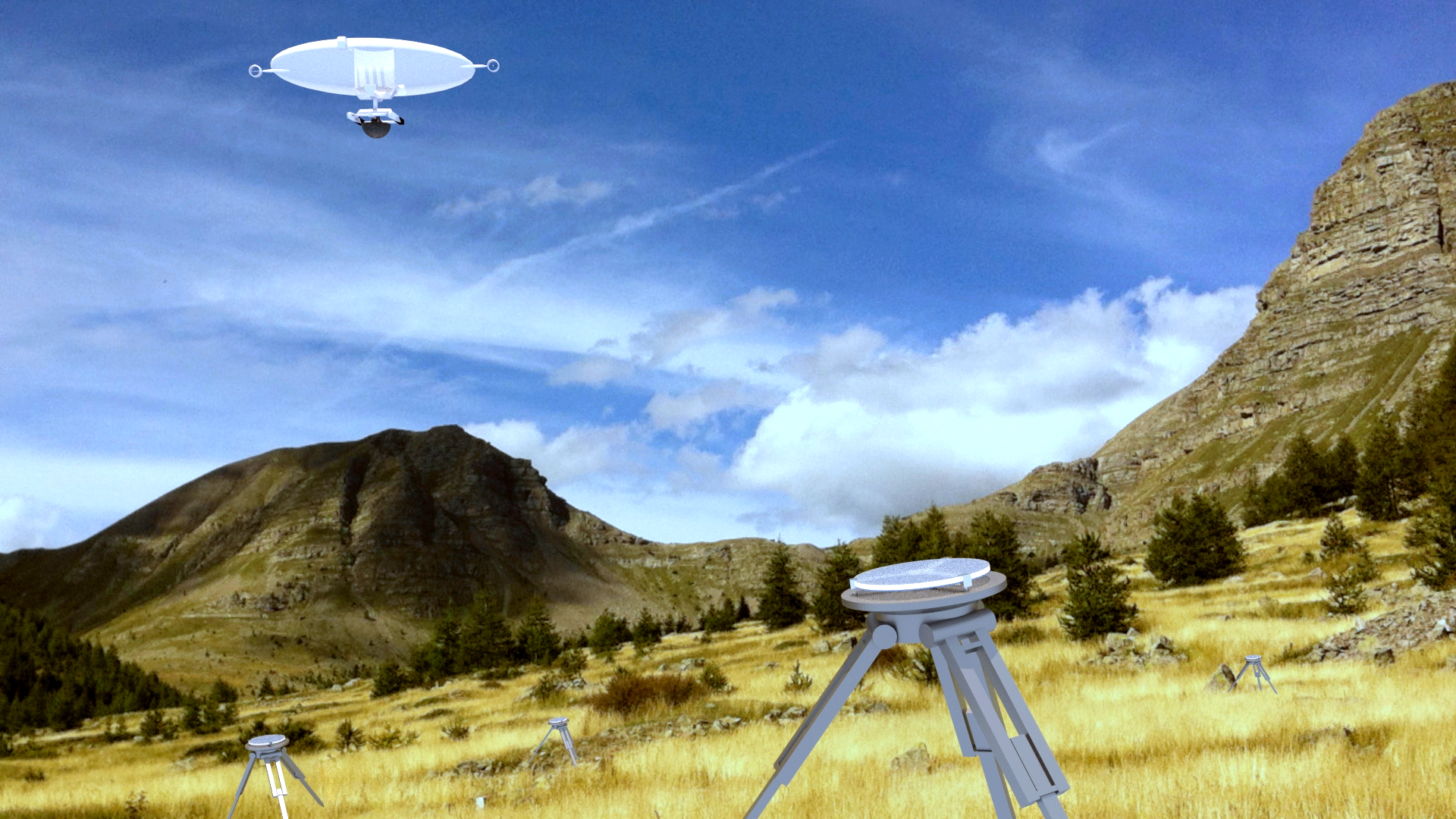 A new eye on space

A new kind of telescope is born

Optical astronomy techniques are constantly evolving. The largest telescopes being planned around the world are now reaching 40 m in diameter for their primary mirror. However the methods, materials and financing capabilities that have enabled the production of such colossi reach their limits.

For the astronomical challenges of the future, we will always need to get better images of smaller and more distant celestial objects. Therefore, it becomes necessary to create a brand new form of optical instrument which could overcome physical constraints and move to all-new size scales, at lower costs.

It is the essence of the scientific project proposed by Antoine Labeyrie since 1996 and that he called: HYPERTELESCOPE.

An innovative project, a world premier.

Thanks to its revolutionary architecture invented by Antoine Labeyrie, the Hypertelescope overcomes size limits that restrict the traditional telescopes of today.

The development of Imaging by interferometry techniques allows to a Hypertelescope “Carlina” to be equipped with a diluted primary mirror. It is constituted of multiple mirrors which form together the fragments of a unique mirror without limits of dimensions. This founding principle makes it an evolutionary tool and multiplies its performance and its possibilities. Its production costs are incremental and largely lower than those of the very large telescopes currently in development, for much higher yields.

An Hyper-Telescope is a discrete and sporadic structure wich allows to see farther in space. It dissolves itself in its environment. And its modes of operation correspond with a facility in the middle of wild, classified and protected  natural mountain sites.

We are now free to imagine a new generation of optical tools for astronomical observation that will surpass the capabilities of everything that already exists or is in project over the world. 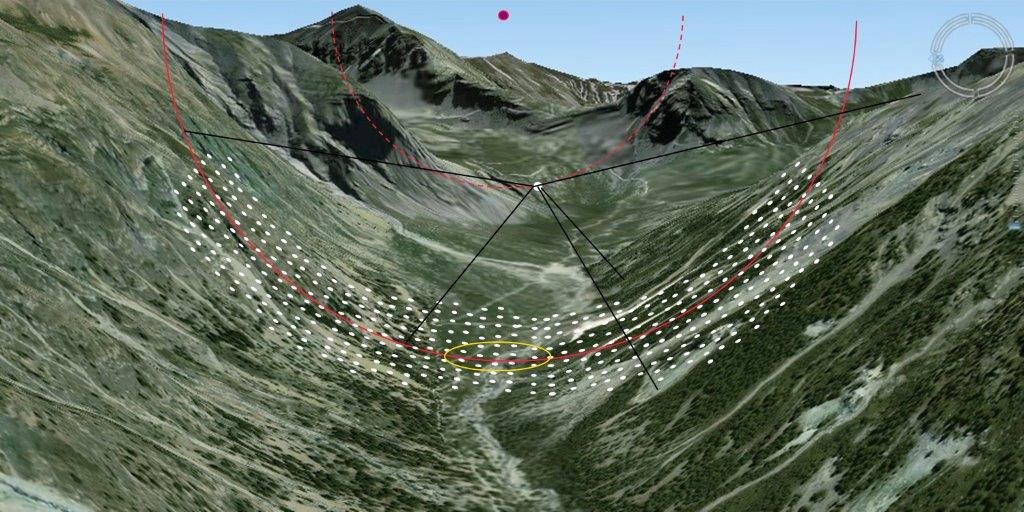 Antoine Labeyrie, now Professor Emeritus at the College de France. It is a pioneer of Astronomical Interferometry. He imagined and began to realize in the Alps of the South, with its teams, a first prototype of giant telescope at the top of the mountain: the Hypertelescope.

A first prototype of Hypertelescope type “Carlina” is currently under study in France in the Ubaye Valley in the Alps of Haute Provence. When it is completed, it will be 200 m in diameter. With 800 mirrors 15cm, it will accumulate two times more of collecting area than the Hubble Space Telescope and a visual acuity almost one hundred times greater. It will be five times as powerful in resolution that the future EELT from 39 m in diameter whose construction is scheduled for 2024 by ESO to the Chile.

But this is just the beginning. The scientific team has estimated that we could build a Hypertelescope extra large with a diameter of the order of 1 km and install it in the depression of a former impact crater, in the crater of a dormant volcano or some high valleys of the Andes or of the Himalayas.

In a final version, deployed in space, the Hypertelescope diameter may be extended at least eight to ten times more than the diameter of the Earth. And at these dimensions, it will produce with sharpness some images of the surface of an extrasolar planet at approximately 10 light years of our system !

The principle of the hypertelescope : the particularly innovative design of the hypertelescope with the  ” Carlina ” architecture is to replace the single mirror of conventional telescopes by a ” diluted miror “, that is composed of many  non full complement small mirrors, positioned very precisely, to form them all a giant virtual concave mirror.

The capacity of the hypertelescope : one considers that, for a telescope, the biggest is the mirror surface which collectes the light, the more reach, the deepest and more detailed the image will be. The system of the Hyper-telescope type Carlina offers the possibility to considerably increase this surface without increasing the material difficulties by multiplying number of small mirrors. This allows us to exceed the current dimensions of the very large telescopes currently in project without problem.

The effectiveness of the hypertelescope : the diameter of the mirror of a telescope – the distance separating the two furthest edges of a mirror – determines its ability to separate the finest details of the target stars. By its dimensions dozens of times bigger than conventional telescopes, the visual acuity of  a Hypertelescope will reach thresholds never yet touched

The possibilities of the hypertelescope : the Hypertelescope system allows to install and operate several optical devices at the same time over a same telescope mirror. It permits to practice as much simultaneous observations of different objects in the sky with exactly the same technical specifications. In practice, each optical device will add a new telescope to a telescope already built for incredibly reduced cost. Thus, a hypertelescope, is also a multi-telescope. 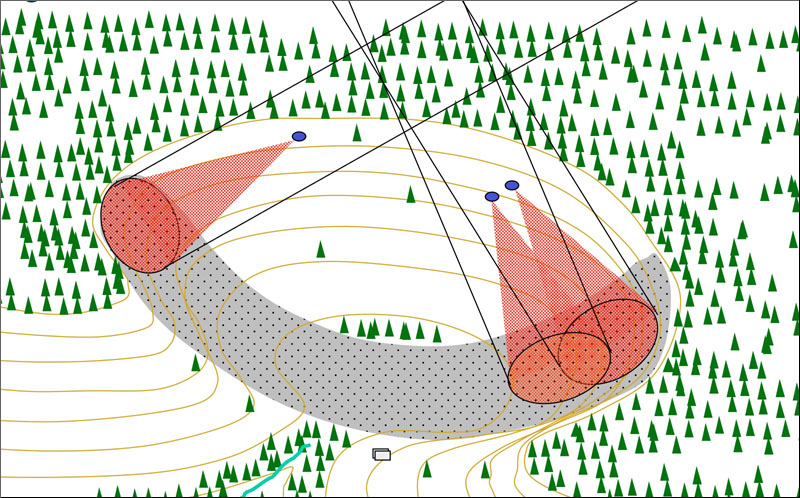 “The hypertelescope blends into the mountain and made body with it”

The first prototype of the Hypertelescope is being developed since the summer 2011 in the Alpes de Haute-Provence, in France. The site of the Valley of the Moutiere, chosen for its astronomical qualities, is submitted on his side North to the regulation of the Office National des Forêts (ONF) and on its side South of the National Park of Mercantour (PNM).

The hypertelescope fits into nature with the greatest respect for the delicate balance of its wilderness, wildlife and local flora. Its installation requires no environmental processing and generates no visual, audible, nor hardware pollution.

A citizen science project that pushes the frontiers away

The project of the Hypertelescope is developed by an international team (France, USA, Spain, Canada, India, Algeria…) of scientists, researchers, engineers, teachers, technicians, mechanics and amateur astronomers gathered under the direction and the chairmanship of Antoine Labeyrie and Denis Mourard.

Since the year 2014 and the retirement of Professor Labeyrie, the project initially supported jointly by the College of France and Obresvatoir de la Côte d’Azur, can no longer receive the direct support of these prestigious institutes.

The Association Hypertélescope LISE – Laboratoire d’Interférométrie Stellaire et Exoplanétaire – was then founded in August 2014, to support the Hypertelescope project and meet the needs of the scientific teams from all walks of life in the human resources, administration, logistics and funding.

Our commitment, today, for the future

The hypertelescope, is the future. The future as we plan. A future more harmonious and more respectful of the human and natural environment that welcomes us. More balanced between men of all backgrounds, from all backgrounds, of all, so that the image of each mirror of the Hypertelescope, each combines its clusters of activity and participates in the development of the common good.

This object, the Hypertelescope LISE association is a body which promotes:

Because at the root of all the major advances of humanity, of all the discoveries, there are new tools, and because the depths of space tell us about our origins, of our destiny, the Hypertelescope LISE association supports the telescope of the future project.

The hypertelescope invites you to the experience of participatory science.

The association Hypertélescope LISE, in an object of citizen science, works actively to support the development of the project of giant telescope by interferometry invented by Antoine Labeyrie. Help us to continue and accomplish this great project.

The project of the largest telescope in the world is worn at arms length by a handful of men and women volunteers and enthusiasts. The future of this beautiful project does the will of men. If you want to make your contribution to the building, the association offers several simple actions.

Each membership gives us more weight. Each contribution made us a big step.

Directly from our site web hypertelescope.org or mail choose the option that suits you:

You can become a member of the association and get involved in the adventure.

Fill out our registration form and enter fully into the”citizen Science”.

You can help finance the operation and development of the project.

Support significantly the activities of the association through monetary and material donations.

You can actively participate to achieve the project of the future telescope.

Get involved with scientists and engineers in this scientific adventure.

You can promote the project around you and on social networks.

Show your support to your loved ones and thus contribute to the popularity of the hypertelescope.

Your requests for information and your comments will be studied carefully by the team. We will reply you as soon as possible. Thank you.