“See the passage of the seasons on exo-planet…”

The hypertelescope in space would consist of a flotilla of small mirrors arranged in the arc of a sphere and put next to a satellite receiver that combines the light beams. It could be put in the Lagrange 2 point station to benefit from its gravitational stability and also always remain in the shadow of the Earth. 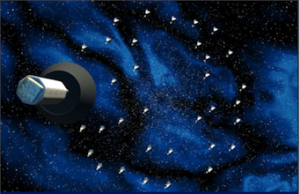 The stability between the satellite playing the role of receptor and the flotilla forming the diluted mirror would be less subject to terrestrial hazards (atmospheric turbulence, winds, weather, wildlife, vegetation, etc.)

The diameter of the hypertelescope would not longer be limited to terrestrial natural areas, the valleys or the hollow top of volcanoes, but could deploy in space on surfaces of several times the size of the earth itself.

Sending it to space would be greatly simplified compared to classic space telescopes like the Hubble and James Webb. The satellite receiver would not need to be large. The fleet of small mirrors, a few centimetres in diameter could be sent in several times as many satellites, much less heavy and much less fragile than large ones. They might also be replaced or the number increased much more easily. 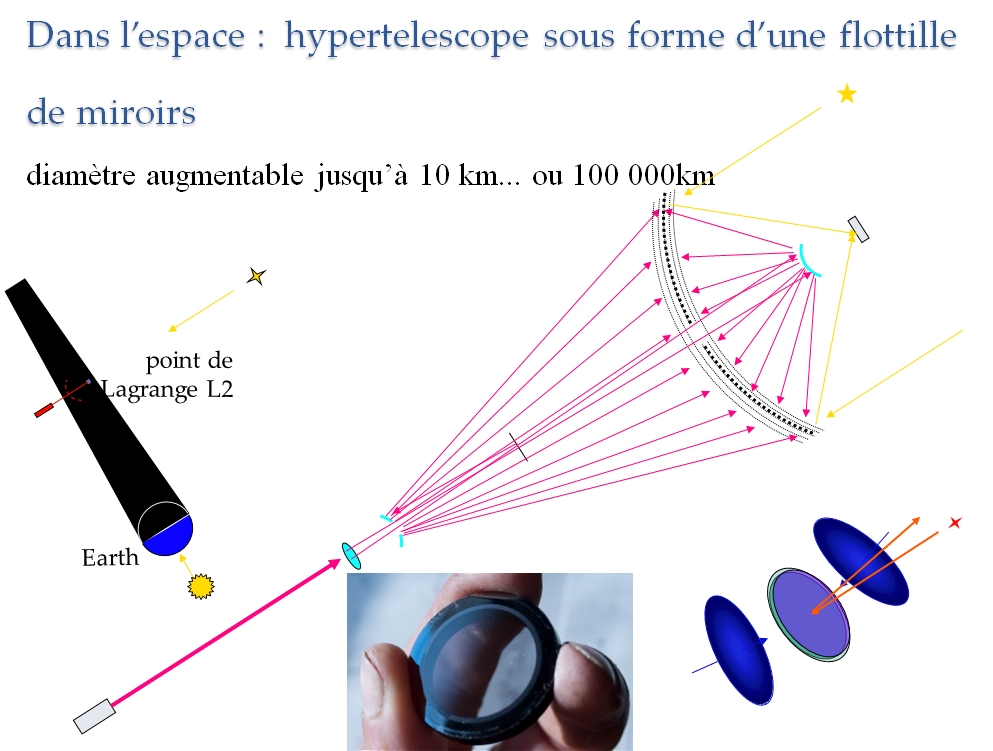 The feasibility of a space hypertelescope consisting of a flotilla of mirrors on a virtual surface of 100 km in diameter has already been explored.

Numerical simulations have shown that it would be possible to obtain direct images of an exo-Earth orbiting a star 10 light-years from the Earth.

The level of details would be such as to allow it to separate the seas and continents, vegetation zones (Labeyrie, 1999).

The principle seems extensible for diameters reaching 100,000 km, the dimension necessary to try to see details on the surface of what appears to be a neutron star,  the crab pulsar, a natural rotating light with a diameter of about 20 km.

A technical test of Franco-Swedish Prisma’s steering of two small satellites equipped with micro-rockets in 2010 to experiment the formation flying in space proved to be suited for a flotilla of mirrors with the precision required by interferometry.

An alternate control mode was also suggested (Labeyrie et al. 2009) which was the subject of a study by NASA. In this system, the flotilla composed of many small mirrors should be piloted and trapped using standing wave generated by a pair of laser beams.

Studied theoretically by numerical simulation, this type of trapping is also the object of experimentation in the laboratory. Thus the non-linear Institute of Nice (INLN Université Nice Sophia Antipolis) began experiments with a simulator under ultra-high vacuum (Labeyrie et al., 2010). The control of a flotilla of small mirrors by trapping lasers may be more accurate, more reliable and more economic than when made by microsatellites, as the micro-rockets have a limited operating time.