“The hypertelescope promises a scientific revolution”

The five largest existing monolithic mirrors, constructed at the turn of this century have a diameter of 8.4 m. Four of them equip the VLT (Very Large Telescope) built by ESO (European Southern Observatory) in Chile, the 5th is used in the Japanese Subaru telescope in Hawaii. The very large telescopes in development will be equipped with multiple joined mirrors reaching a total area exceeding thirty metres.

The hypertelescope is a giant astronomical telescope designed on a new principle that the primary mirror is composed of many small disconnected mirrors arranged in a very specific way on a virtual spherical or parabolic surface. It is called a diluted telescope.

Beams of light reflected by the small mirrors placed on the ground converge and interfere in a focal point where they form an image. This is located in an optical device placed in a gondola suspended above the ground. 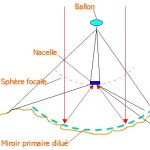 It is at the Haute-Provence Observatory that this concept was developed and where was first tested the principle of a focal nacelle suspended at several tens of meters over a network of mirrors, originally from a balloon. This allowed the determination of feasibility and its applicability to astronomical Imaging.

That was the first prototype of a diluted telescope consisting of a network of mirrors following the curvature of a giant virtual spherical mirror.

This helped develop techniques of servocontrol and metrological techniques that allow the steerring of the basket at a distance with sufficient accuracy.

The image returned by the mirrors on the pod has low luminosity in the center of the field. An optical device placed in the basket of the ubaye Valley includes a ‘pupil densifieur. It is an optical combination original developed by Antoine Labeyrie at the Collège de France and which brings together the light beams of the interference to the center of the field.

The resulting image is then sharper and brighter. The peaks of interference have lost their intensity.

Schema of the pupil densifier 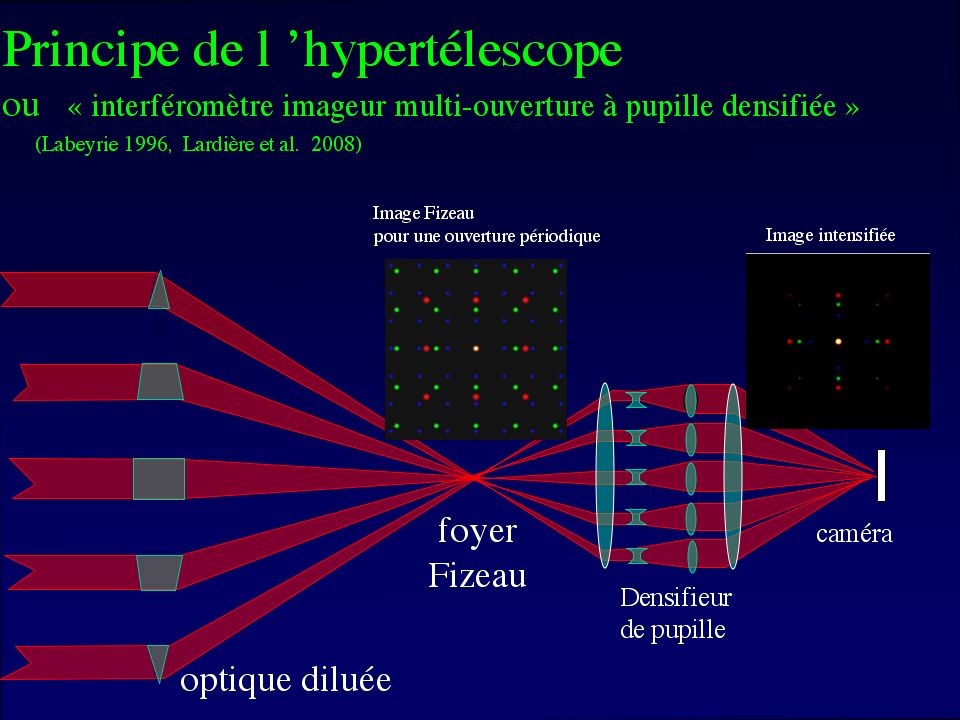 Image before and after the pupil densifier

The stars are moving on the celestial vault throughout the night. This movement is due to the rotation of the Earth. To ensure tracking during observations, it is not the mirror which is reoriented like with a conventional telescope. The mirror is fixed on the floor and it is only the focal receiver that moves with the mobile gondola suspended above the ground.

Positioned very precisely using 6 cables operated by stepper motors, it points the reflection of the stars in the mirrors, a bit like you could follow by moving the head the reflection of a plane in a windows.

After treatment by the optical device, the image of the star is sent to a small telescope on the ground that is following the movements of the gondola with great precision.

Diagram of the shift of the optical pod on the sphere

The optical processing of the light beams reflected by the small mirrors of the ‘diluted mirror’ allow reaching a image quality close to that of a giant mirror of a single block. The difference is the total surface of mirror used which determines how much light is collected..

The two tripods of the “mirror zone” are barely visible in the landscape.

Visit the Observatory of haute Provence-> website of OBS

Article on the Observatory of the côte d’azur-> https://lise.oca.eu/spip.php?rubrique26